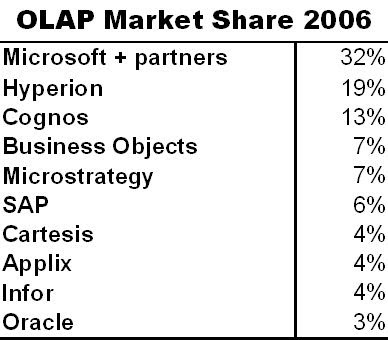 There are two independent vendors left in the list and neither is going to break out. Microstrategy is in the ROLAP niche, suitable for big gnarly problems that need a lot of money. Microstrategy could make a good fit with the newly independent Teradata another company in a similar niche. Infor is a private company that has been rolling up second tier software vendors in the same way that Computer Associates did in the 80's and 90's. It is the new "home for old software".
Posted by Richard Taylor at 12:05 PM No comments:

Someone in the audience put it best when he said that he uses "The Secret Diary of Steve Jobs" as his primary source of tech news. This was at the Computer History Museum last Tuesday evening when Dan Lyons AKA Fake Steve Jobs (FSJ) appeared on stage with former Apple Evangelist Guy Kawasaki, and Brad Stone the journalist who outed him. In the meeting, Dan Lyons seemed to be a little confused that anyone would think that his column is a useful commentary on tech events, but I know what that audience member means.

I too use FSJ as a primary source of my tech news and commentary. While the blog is intended as a satire, Dan Lyons is a knowledgeable tech writer and he gets the details right. Moreover, the format means that he can be perfectly frank and even rudely negative as he often is. I get more information out of 200 word rant from FSJ on a subject such as Facebook valuation that I get out of a perfectly balanced 1500 page article in the NYT or WSJ. What is more, a spoonful of humor sugar helps the medicine go down.

There is the question of bias. Truth be told, I find it much easier to deal with information when the bias is clear and on the surface rather than cleverly buried as it is in the 'balanced' articles written by Journalists. Moreover, Journalists need to make nice with their subjects so that they will continue to get access in the future, so they tend to backpedal on the negative, or at least bury it in the n'teenth paragraph. On the other hand, FSJ in character says what he thinks, and the truth comes straight out.

The event itself was well worth attending. Dan is a very funny guy and he had us laughing for nearly two hours, mocking everyone from the Appletards in the front row to Megan McCarthy of Vallywag at the back. There were at least 200 in the audience, including several notables such as well known tech writer John Markoff and iJustine.
Posted by Richard Taylor at 11:42 PM No comments:

For some time I have wanted to write technical posts on specific programming and programming languages topics. While I could post them in this blog, they would not really fit with the lighter hearted and wider ranging posts here. So I started a new blog called "A Developer Notebook" for the technical posts. When you look at the content, there should be no mistaking the goals and purposes of these two blogs. Enjoy!
Posted by Richard Taylor at 10:51 PM No comments: